The days of fixed processes may be over.  At least that’s what I discovered working with a number of teams who are successfully making a transformation from the ‘old ways’ to a more modern, human centric, organic way of doing business at a large corporation.

One thing that stood out time and time again in these teams, was that nothing was fixed; everything was available for criticism and improvement.  The movement was not chaotic, rather people had deeply understood the need to go with a Minimum Viable Product (MVP), test things out, learn and be humble about their ideas, and then to continuously iterate.  This was not only valid for products (as defined in The LEAN Start-up), but for EVERTHING!  For example:

For team topics, often the proposals were made by voluntary teams of people: they just had a need or an interest in fixing the tension.

Some teams had a shared ‘handbook’ or ‘onboarding’ manual that they constantly updated as things were figured out.  These manuals captured ‘the way things are done here (at least for now)’ for that particular team or company and were often captured not in some fancy document, but something like a OneNote file or a wiki.

The fundamental basis of this approach is to avoid the wasted effort of trying to predict everything up front.  These teams know that such an intellectual exercise is totally pointless: they have deeply understood that nobody can predict the future; it’s better to start “quick and dirty” and learn as they go.  Furthermore, there could be a ‘backlog‘ of items to be tackled ordered by priority of needing to be fixed.

Some people felt uncomfortable with this approach in the beginning (and some forever). They were not used to being responsible for defining their own future and solving problems that typically would have been seen as an ‘escalation’ or ‘management problem’.  Or in some cases, people were less comfortable starting with a rough solution: they felt that they had the need for perfection up front.  Nevertheless, in most cases people felt that this responsibility was empowering, and that because they designed their own solutions they bought into them more deeply.

The problem solving, proposal making and collective decision making did not come easy either.  This had to be learnt, practiced, failed, cried about (there’s always some crying involved), laughed at…  all step by step, fully iterative as well.

The iterative nature of things was also less stressful once people understood it: as soon as people realised that nothing was set in stone, and there was less of an attachment to right and wrong judgement, they could relax a bit.

The key point is this: live in the question.  How can it be better than this?

This is nothing new: quality systems have for many years talked about the Plan-Do-Check-Act cycle.  It is also a basic aspect of Holacracy: holding regular governance meetings that address ‘tensions‘ in the existing way of doing things. 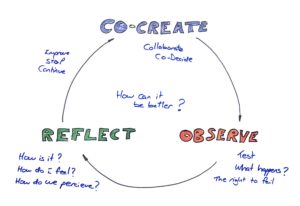 So why not give it a try in your team? Start with a fresh sheet; list the most pressing problems in order or priority, don’t fix things that ain’t broken; ask for volunteers and set them free. Test and learn and write your manual step by step.

Can you imagine a bright, creative, fulfilling future for you and your organization? Become resilient in a complex world. Infuse new ways of being, thinking and doing with TheTeaMakers.